Jayne has been recognize into the exclusive group of top producers who have achieved more than $1 million in gross commission earnings during their career with RE/MAX. 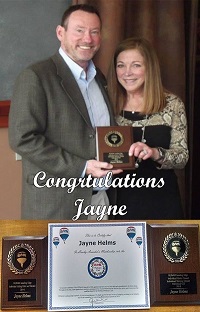 At the annual 2014 RE/MAX Award Luncheon, Jayne was awarded the following:

RE/MAX Leading Edge - Jayne had the largest number of Listings and the highest Volume for an Individual in 2014.